From Beginner to Beethoven: 12 Tips for Beginning Piano Players 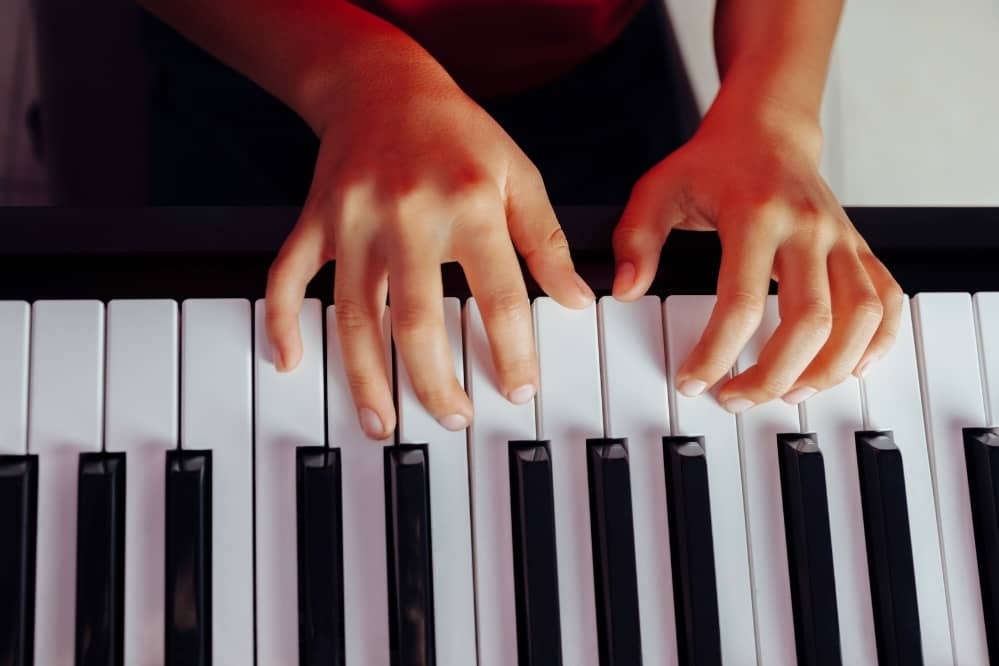 That’s a shame, not just because the piano is such a life-enriching instrument, but because it represents a remarkable chance to unleash your passion and unlock new opportunities. There are plenty of tips and tricks to make keyboard playing that much easier.

These 12 tips for beginning piano players will have you tickling the ivories in no time.

Well, not right now (our list has just begun!) but the stereotype of the Endlessly Practicing Piano Pupil is a bad one. Not only is that a fast way to make yourself miserable and not want to play or practice the piano any further, but you’ll likely burn yourself out, which won’t do any good to anyone.

Music is all about rhythm. You need to practice long and consistently enough to build one up, but if you feel things are starting to drag or you’re just not in sync, taking a break can help you recharge.

2. The Difference Between Child and Adult Beginners

If you have ever tried to learn a foreign language as an adult, you know how difficult it can be. Children are more receptive to learning languages.

Children are still impressionable enough to learn two or more languages at once, however, this is far harder for adults. You should thus refrain from comparing yourself to children. Instead, you need to find a pace that works for you. Part of what makes learning languages easier for children is that they’re still learning how to think. Adult minds are much more “set” in that way, so you need to open yourself up to new ways of thinking.

As the saying goes, practice makes perfect. However, there is an even more compelling reason to practice on a consistent basis – immersion. Again, think of what it takes to learn a foreign language. It isn’t enough to simply do a few exercises every now and again. You need to do them consistently and supplement them with things such as music, films, shows, or try and use it yourself in your daily life as much as possible.

The same holds true for music. Listen to the kind of music you wish to play, and if possible, play along.

Eventually, you need to develop an ear for music. This will make everything from improvisation to hand movements easier. In short, this is a tip that will make many of the other tips on this list work better for you in the long run.

Read our How to Play Piano by Ear for Beginners: A Quick Guide

It should go without saying that playing things you hate doesn’t lend itself well to practicing consistently. Playing music should be a joyous experience, and that won’t come from simply playing the same scales and standards over and over again.

“Variety is the spice of life,” says William Cowper, so why not spice up your piano practicing routine with different types of music? Mix some pop songs in with you Brahms and Beethoven. Play different kinds of jazz music. If there is music from TV shows or films that you love, you might consider trying to learn to play those as well.

6. Play with Someone Else

One of the most taxing things about practicing music can be the fact that it can leave you in a state of isolation. Even if you are an introvert or are simply looking for a little alone time, spending every day on your own playing the piano may seem like a bit of Chopin-esque romantic beauty, but it’s in fact a recipe for loneliness.

In fact, Chopin enjoyed a lively social life. He understood the necessity of involving others in his musical life. Conversely, Ingrid Bergman’s piano virtuoso mother in Ingrid Bergman’s Autumn Sonata focuses so much on her playing that she isolates herself from her daughter, with disastrous consequences for them both. If you’re incredibly committed to practicing day after day, finding someone to share the experience can make sure your playing doesn’t sacrifice your personal life.

7. Work on Scales and Basic Exercises

This is the tip nobody wants to hear, but it’s still true. Grammar is boring and basic but essential before you can start weaving words like a Wordsworth-ian wordsmith. Likewise, before you can play Bach, Beethoven, the Beatles, or Billy Joel, you need to make sure that you understand the basics of music, and that means practicing scales over and over again.

Pneumonic devices can also help. For example, “Every Good Boy Does Fine” and “FACE” stand for the “E G B D F” and “F A C E” scales, respectively.

8. Work with Metronomes and Apps

As mentioned, one of the great keys to mastering any musical instrument is staying in rhythm. Metronomes have long been used for that purpose. There are plenty of free ones on YouTube, allowing beginners to follow along while playing so as to enhance their skills and musical awareness. One of the great things about YouTube Metronomes is the fact that they offer a wealth of different levels, so no matter what kind of beginner, intermediate, or even advanced student you are, you can find a metronome that fits your rhythm and needs.

That being said, you can also play in time with old-fashioned electrical and mechanical metronomes as well. The key thing is to make sure whatever metronome you choose is calibrated to your skill level and the pace at which you wish to work. Remember – just because a metronome is comfortable doesn’t mean that it is working for you. On the contrary, you should probably look for metronome beats that push you a little bit so you learn to expand beyond your beginner skill set.

9. Learn the Power of Improvisation

Jazz is all about improvisation, taking the rhythm that you’re given and adding your own twist to it. Of course, there is no reason you can’t add in some improvisation to other musical fields. On the contrary – learning to improvise early on can be a great way to test how much you really know and are able to use the fundamentals of piano playing when placed on the spot.

If larger pieces feel a bit too overwhelming, you could try breaking them up by movements, by page, or even line by line. Another name for this is “chunking your measures.” This way you can find a way to get them done quicker and in a more manageable way.

It can also allow you to expand beyond the beginner stage faster than you might normally be able to by simply playing whole pieces when you’re adept enough to play the whole thing. Sure, you may not be able to play a whole Mozart sonata or Beethoven symphony yet, but can you play a few bars? Maybe work your way up to a whole page? Incremental strategies like that can make learning not just a particular piece but the fundamentals of good piano technique much easier.

The same is true of musical notes. The sooner you memorize the notes of a piece, even simple ones, the sooner you can focus all the flourishes and touches that make them so powerful.

The position of your fingers and hands matters greatly in piano playing. That’s why practicing good finger and hand position as well as finger stretches to limber up are so important.

Another tip on fingers – don’t look at them. Just as you need to memorize pieces of music, you need to do the same when it comes to your finger and hand positions and movements. For you to really play the piano well and progress beyond the beginner stage, they need to come naturally to you, and that means memorizing and practicing enough that you develop muscle memory as well as a keen mind for music.

Learning to play the piano well is as much a mental process as it is a physical one. Many of the techniques mentioned here depend on both of those elements of good piano playing being used in concert with one another. You need to develop your mental approach to piano playing and be physically adept enough to carry that out.

By following these 12 tips, your path from beginner to Beethoven will go even smoother.