Is Playing Piano by Ear a Gift? Playing by Ear vs. Playing by Reading Music 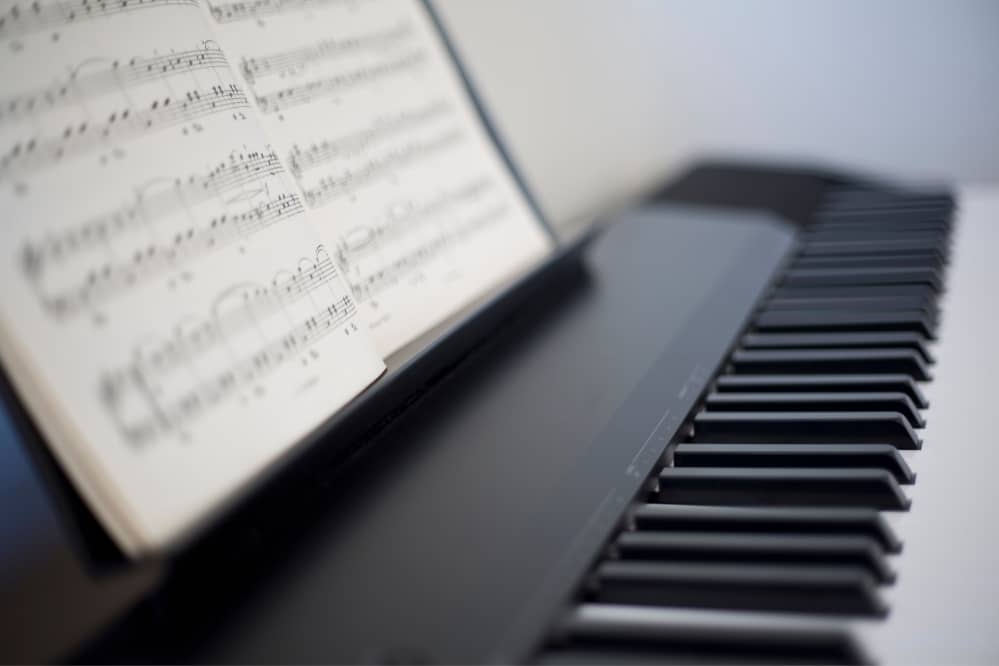 When you hear someone play the piano by ear, it’s only natural to get a little envious, especially if this is something that you can’t do yourself. There are all types of musicians and just because you can’t play by ear doesn’t mean that you’re not a good musician. But is playing piano by ear a gift or something that can be taught? Is it something you can learn over time and with practice? The answers are a little more complex than you think because a lot of it depends on the type of music you’re talking about and many other factors. If you’ve always wondered about people who can play by ear, this article is for you.

What Is Playing by Ear?

Playing music by ear simply means that a person can hear a song, sit down at the piano, and play that song without ever seeing a copy of the sheet music itself. It doesn’t mean that a person will play by reading the music and then play it without looking at that music. That is simply memorizing a piece of music and nothing else. To hear the notes when a song is being played or sung and then immediately sit down and play that particular song is known as playing by ear, and most people have two questions about it:

Let’s take the first question first: is playing by ear a gift? According to most experts, the answer to this question is yes, it is a gift. Indeed, playing by ear is an innate talent that not everyone has but this doesn’t mean that that person is necessarily going to be a great musician. In order to excel in music, you still have to know the fundamentals of playing the notes correctly. A lot of people who play by ear think that they don’t need lessons and don’t have anything important to learn about music. Unfortunately, this isn’t the case.

So, while playing by ear is a gift and an innate ability, these people will still need to be taught further about music if they decide that they want to make music their profession. Of course, if they are not interested in music as a career, then playing any musical instrument by ear is a gift that they can just enjoy and use to encourage themselves to develop so they can enjoy it even more.

Are There Downsides to Playing by Ear?

Surprisingly, there are a few inconveniences to playing any type of instrument by ear. For one thing, they can be somewhat difficult to teach because, as mentioned above, they feel as though they do not have to know the fundamentals of music. In fact, sometimes they are so accustomed to playing their instrument without any music that they feel as if this is the only way to play. Piano teachers sometimes find them a little difficult to teach because of these aspects.

And why would someone who can play by ear want to learn to read music and study music theory? There’s a simple reason. Learning the fundamentals of music is essential to becoming a better musician so even if you intend just to play at weddings or with a group of other musicians occasionally, these lessons are a must. And if you ever do want to play some sheet music, it’ll do you some good because you’ll already know enough about reading music to play the notes flawlessly.

Is Playing by Ear Commonplace?

Now let’s take a look at the second question that many people have. How rare is playing by ear in the general public? Estimates vary greatly depending on what you read and which source you’re relying on to give you an answer. The American Psychiatric Association (APA) claims that only one in 10,000 people have perfect pitch but this doesn’t necessarily mean that all of these people can play by ear. Other sources state that the number is one in 10, while other estimates put the number at between one-quarter to one-half of one percent of the population. Regardless of how you look at it, playing a song by ear is very uncommon.

So far, keep in mind that even people who can play piano by ear need lessons in order to improve their musical skills, and that people who love music and are devoted to it can be taught to play just as well as someone who plays everything by ear. In other words, when it comes to how great they sound as they’re playing, both people who play by ear and those who have to have music in front of them to play a song well can sound extraordinary as they play.

Can You Learn to Play by Ear?

When it comes to playing by ear vs. reading music, is it any easier for the former and more difficult for the latter? Not necessarily. Both people who play by ear and those who play with music in front of them can put themselves into the piece and learn to play with emotion so that every note is special. After all, anyone can learn to play notes on a piece of sheet music but not everyone can play with the right feelings and emotion so that the piece sounds as it was intended to sound by the composer.

So, can you learn to play by ear? The answer is maybe. Not everyone can do it. In fact, some of the world’s best musicians aren’t able to play without music in front of them or without memorizing the song. You can, however, learn as much as you can about music theory and other aspects of playing well and learn to play by ear somewhat better. That being said, if you weren’t born with a natural talent for playing music, you’ll never be able to play by ear as well as those people who do have this innate talent.

If you’re interested in playing music by ear, just know that unless you were born with this talent, it is unlikely that you’ll ever be able to play by ear as well as people who have had it since birth. You can learn to play by ear a little bit better, of course, but as was mentioned earlier, memorizing a piece of music isn’t the same as playing it by ear. But keep in mind that if you have enough interest in and devotion to music, you can greatly increase your playing ability even if being a professional isn’t your goal. The fact is that with the right lessons and the right amount of practice, you can accomplish whatever you wish to accomplish in the end.

Learning how to play music by ear may not be something that everyone manages to master, but do not worry because some people who have this talent find learning music “the right way,” i.e., through formal lessons, a bit difficult sometimes. The truth is that no matter what type of musician you are, you’ll have challenges when you’re trying to improve your talent and your skills. Even if playing by ear isn’t a goal of yours, you can still become a better musician so that you can make music an important part of your life.