Should I Get A Keyboard With Weighted Keys? 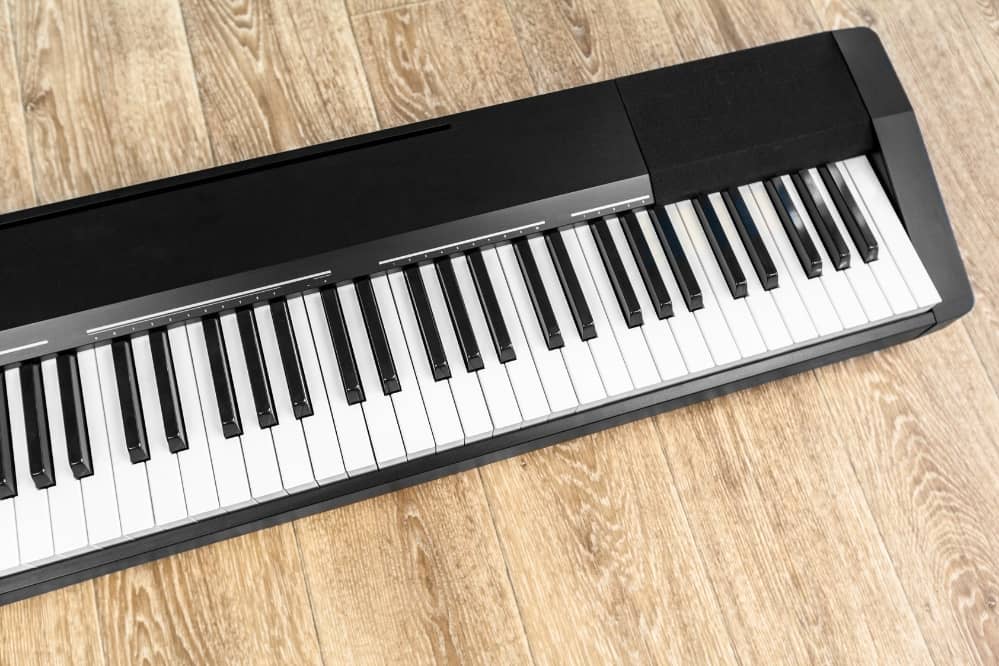 There are plenty of plusses that come with piano keyboards. They are lighter and often less expensive than grand pianos, and are certainly a lot more portable. However, because it is so light and constructed so differently, the keys can likewise feel different. That’s no small difference, since “the feel” of the keys beneath your fingers can make a big difference in how you are able to play.

That’s why some keyboard players consider weighted keys to be a better answer.

Let’s take a closer look at the “weighty” issue of weighted versus unweighted scales and weigh the scales between the two.

As the name would imply, these are keys that have been artificially weighted on keyboards so as to mimic those in “real” pianos. When the keys are pressed on a standard piano, a hammer is triggered that strikes different strings, which is what creates the sound. This is obviously not present in a keyboard, so weighted keys attempt to artificially replicate that feeling.

This is essential because, when you press a key on a piano, it springs back up due to its connection to that taught string to which it is attached. There is a unique feeling to piano keys springing up once they have been freed, and that’s simply not present in unweighted keyboard keys.

This can become a real problem for people practicing on a keyboard. If you practice with unweighted keys, you won’t get the sense of what a piano feels like, which means if you switch to one – or, more confusingly still, switch between them – you’ll experience a totally different “feeling” when pressing down the keys, which will simply feel “wrong.” Remember, you’re trying to build up muscle memory and a rhythm when you practice on the piano, and with unweighted keys, especially if you ever plan to play “real” keys on a piano, that’s simply not possible.

There are other benefits to weighted keys on portable keyboards as well. For one thing, because they are portable and don’t have all the strings and hammers of a traditional piano, you don’t need to do all that fine-tuning work to get them to play. They also tend to be compatible with headphones, which can be hugely beneficial for you and anyone around you who may not want to hear scales or sonatas over and over.

There are different kinds of weighted keys, the main ones being semi-weighted, hammer action, and graded weighted keys. Semi-weighted keys can sometimes be awkwardly stuck in between extremes, not quite feeling like real piano keys or unweighted keyboard ones, and so they are best avoided unless there is no alternative.

Hammer action keys feature a built-in mechanism that mimics the feeling of a hammer striking a chord in a piano. Different manufacturers mimic this resistance in different ways, so you’ll want to read reviews to see which ones best fit with your expectations.

Needless to say, all of that innovation can cost a pretty penny. The more innovative the key weighting system in simulating the actual experience of playing a piano, the more expensive you can expect it to be. Whether that fits within your budget is another matter, but as we’ll see, in many instances investing in these kinds of keyboards is not just a savvy move from an educational standpoint, but it could be a huge money-saving move as well.

Finally, there’s the fact that, just as you need to do weight training for sporting endeavors, the same holds true for pianos. They may look small, but the keys on a piano still require strong fingers to press and keep down, especially when you’re playing quick or complex scores. If you play keyboards that are unweighted, you will not build up the finger strength that is necessary to play proper pianos. This is yet another reason why it is notoriously difficult to transition from unweighted keyboards to the “real thing” with grand pianos. If that’s your eventual ambition, you need to build up finger strength, and that means looking toward keyboards that feature weighted keys.

You may be right – if you aren’t sure yet that you or your child will be sticking with the piano. If purchasing this keyboard is more of a whim or an experiment than anything else, then it makes perfect financial sense to invest in it accordingly. You don’t need to spend hundreds or thousands of dollars to see if you or your child will like the piano. Much less expensive unweighted sets are perfectly fine for that.

On the other hand, however, if you think or already know that you or your child are planning to stick with the piano, then suddenly the tables are turned and purchasing unweighted rather than weighted keys becomes a much worse investment. After all, unweighted keys will never be able to provide you with the same sensation as playing a real piano, which means if that’s your ambition, you’ll need to buy one – but do you really want to buy that and a keyboard?

Probably not, which is why weighted keys for keyboards exist. They allow you to purchase a keyboard and enjoy all of the advantages that come with it as listed above without suffering the drawback of not being ready to play a real piano.

We’ve “touched” on this already, but touch sensitivity – the term for how that piano-like feeling is created in weighted and unweighted keys – is replicated in different ways. The key is to find the ones that are right for you.

For example, on a real grand piano, the harder you press on a key, the louder and more dramatic the sound. When you think of big booming symphonies such as Beethoven’s Fifth, the touch sensitivity and hard presses on the keys is a big reason why. Think of the famous “Dun-dun-dun-dunnn, dun-dun-dun-dunnn…” that opens Beethoven’s symphony, the power that E.M. Forster conveys in Howards End as Schlegel Sisters listen to it, mesmerized by “the heroes and shipwrecks of the first movement” and “the heroes and goblins of the third.” The power and drama implied by those “heroes,” “shipwrecks,” and “goblins” are due not just to the power of Beethoven’s music but the powerful way in which it’s often played, and that in turn owes itself to touch sensitivity.

Of course, there were no electric keyboards back in the early 1800s when Beethoven wrote that piece of the early 1900s when Forster wrote that novel, so to bring that symphonic piano power into the modern age, you need to replicate the sound of a hammer striking strings with great force.

Grand pianos are still incomparable when it comes to sound. However, if you want your keyboard piano to have any chance of coming close to sounding at all like a grand piano, you need it to make sure they have well-developed touch sensitivity.

The question of what kind of keyboard you should choose is a complex one, as evidenced by the multilayered argument above. That said, depending on what kind of piano player you are, your choice can become a lot clearer.

If you are purchasing your keyboard with the intention of it just being a hobby, and have never played the piano before, you might be able to get away with unweighted keys. They are much less expensive, as mentioned, and it will let you see if you or the learner for whom you are purchasing the piano really like it.

If you know that you or the person in question wants to stick with it long-term, weighted keys are a must – and if you’re really serious about it, spring for touch sensitivity as well. These are essential for replicating the piano playing experience as closely as possible. That being said, every type of keyboard, as with every kind of piano, is different, so you’ll want to read different reviews to see which ones fit your needs best.

By taking your time and considering your options carefully, you can make sure that you find the right kind of keyboard to help you “get in touch” with your piano playing skills.