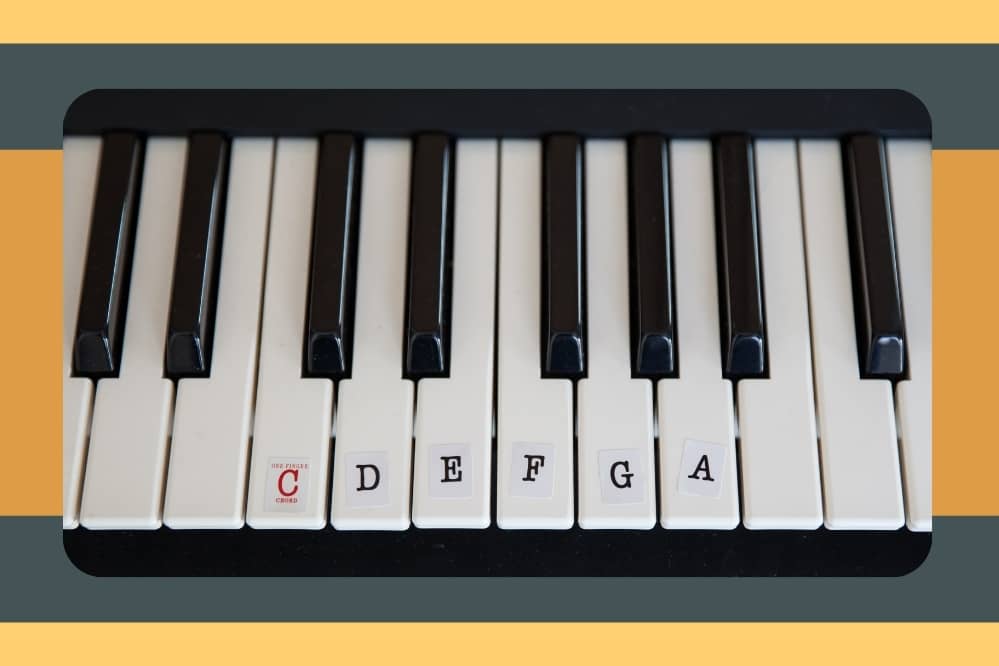 Nevertheless, if you do decide to label your piano keys before you start your lessons, you have options when it comes to how to set up those labels. Learning the pros and cons of labeling versus not labeling the keyboard is important.

Why Should You Label Keys on Your Piano?

For very young piano students, many of whom cannot yet read or write, labeling the keys simply makes sense. If students have trouble learning the keyboard they can become frustrated and even unmotivated. Making it easy for them to learn the keyboard often translates into making it fun for them as well, and the best way to learn music is when the task is fun! And the younger the student is, the more applicable this train of thought becomes.

When you’re playing the piano and the keys are labeled, many people believe that this can stimulate memorization skills. After all, you’ll be finding the keys much more quickly and therefore learning them more quickly once they’re properly labeled, bringing you one step closer to being a pianist who can play without having to constantly look down at the keyboard.

For many students, labeling the keys is Step One of learning the notes, and the sooner you learn the notes, the sooner you can start playing the piano like a pro. The bottom line is that even if you already know a little bit about the piano, labeling the keys is going to help you learn those keys a lot faster, which means you’ll be learning to play a lot faster.

While many people consider labels on the keyboard a crutch, so to speak, they don’t seem to make it more difficult to play the piano, so a lot of teachers believe that they are a good idea. Since it can conceivably take you longer to learn which key is what if you do not label the keys in the beginning, you might as well give them a try.

What Is the Best Way to Label the Keys?

There are different ways of labeling the keys, but first you have to know what they are. A piano keyboard only has seven notes that repeat themselves, starting with A and ending with G. There are white keys and black keys, and the black keys are grouped in a set of two followed by a set of three black notes, then they repeat themselves.

If you look at the white key that sits right before (to the left of) the group of two black notes, that is the letter C. There are a few Cs on every piano keyboard, and every one of them is right before the set of two black keys together.

The white keys are in the order A-B-C-D-E-F-G, and then they repeat starting with A again. The black keys are sharps and flats, so while the white key next to C is always D, the black key in the middle of C and D is always a C-sharp, or a D-flat.

When you’re labeling your piano keys, you’ll be labeling both the white keys and the sharps and flats (the black keys). The symbol for indicating a sharp looks like a hashtag (#), while the symbol that indicates a flat looks like a lower-case B (b). Sharps are higher and flats are lower than the regular notes (the white keys) themselves.

To label your piano keys, there are five choices that make the task easy. Here is a little bit of information on each of these five options:

1.Color-coding the notes. For this method, buy round stickers at an office supply store and choose seven different colors. You’re not going to write the notes on the stickers; you’re just going to assign each color a note and then place them on the piano keys. For instance, all Cs can be red, all Ds can be yellow, etc. This is a good idea for kids who can’t read or write yet. They’ll soon learn what note is associated with what color so it can be easier to learn those notes. If you can only find a package with five colors, use those for the notes C through G and leave A and B blank.

2. Write the notes on the keys. This is a super-easy way to learn piano notes, and you don’t have to write directly on the keys. Just find a roll of white dot stickers, which are usually found at any office-supply store, and write the notes on there. Then, stick the dots on the corresponding keys. Start by labeling all of the white keys, then start on the black keys. Both white keys and black keys will be labeled when you’re done. Make sure that you put a sticker on each and every note, whether your keyboard has 32 keys, 61 keys, or even all 88 of them.

3. Write the notes on only SOME of the keys. With this option, there are a few ways that will work. First, you’ll need those white dot stickers again, but your options are (1) labeling only the A, B, and C notes; (2) labeling only the white notes; (3) labeling just the C, E, and G notes; or (4) placing stickers on all of the notes and then removing them as you feel that you’re becoming more familiar with all of the keys. It doesn’t really matter how you do it, as long as it’s something that makes it easy for you to learn.

4. Use pre-printed stickers to put on the keys. You can find these at music stores or even places such as Amazon. They are pre-printed and have the notes and a small image of the notation on each of the stickers. Most sets come with several different octaves so that most or all of the keys on your keyboard can be accommodated. They are only slightly more expensive than plain stickers that you write on yourself, but they can sometimes be thinner as well, so make sure that you are gentle when applying them.

5. Just the C note, please. Since many students find they can play almost anything after they find their original hand position, you can label just the middle C note with a sticker so that you know exactly where to put your thumb. Once you find the correct hand position, which starts by finding the middle C, you can go on from there to play your tunes.

Why You Should Not Label Keys on the Piano?