What Are the Three Piano Pedals for: What Do They Actually Do? 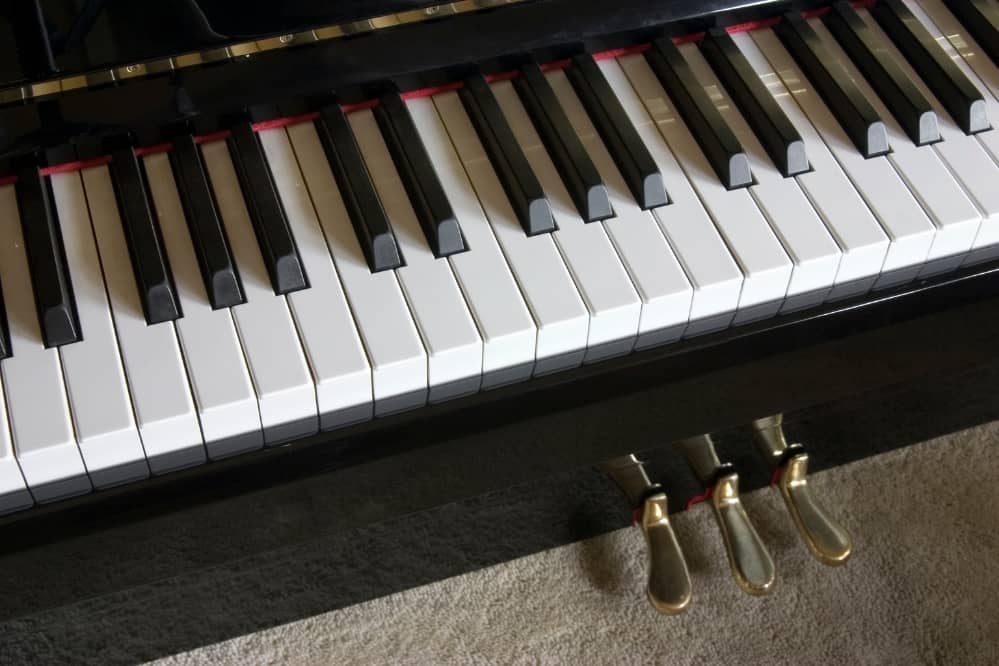 Part of learning to play the piano is not only learning the notes, but also learning what the three foot pedals are all about. Usually, the functions of these pedals aren’t taught when you first start taking lessons, but eventually they’ll be introduced and become second nature to you.
Basically, these pedals are there to change the tone of some of the notes you’re playing, and you’ll press on them gently with your foot in order to get a specific sound. Let’s take a look at all three of these pedals and what they can add to the music you’re playing.

Each note on a piano involves strings in groups of three. If you play the piano without pressing on any of the foot pedals, the hammer inside of the piano strikes all three strings. This gives the note a very “full” sound. If you play a note and press the una corda pedal at the same time, the keyboard shifts slightly to the right and the hammer only hits two of the three strings. This thins out the tone of the note and makes it sound a lot softer.
When using this pedal, the felt on the hammer head will eventually become compacted due to it hitting the strings so often. Over time, this means that the notes sound even softer, so the longer you play and use this pedal, the softer and more subtle the notes will be. In addition, the natural shifting motion eventually means that the strings will be struck with a different part of the hammer head, which also produces a softer tone.
The reason why they call it a una corda pedal is because on older pianos, the hammer would only hit one of the three strings. Una corda is translated to mean “one string.”

The middle pedal is similar to the sustain pedal in many ways. The main difference is that with the sostenuto pedal, the only notes that are held are those that are being played at the exact moment the pedal is pressed down. If you press a note after the pedal is already down, those notes are not affected by this pedal. Think of the sostenuto pedal this way: when you activate the pedal, the dampers that have been raised by the keys utilized are the only ones activated.
Since notes that begin after the pedal is engaged aren’t affected by this pedal, you get a nice sustain without a sound that is “blurry.” This pedal is often used in other ways, depending on the piano manufacturer and how they set up the pedal when the piano was being made. That information is described in more detail below.
Historically, the sostenuto pedal is relatively new, which is why you won’t see it included in a lot of the music composed before the late 20th century. If you are playing older pieces, you likely will never use the sostenuto pedal. That being said, some composers, such as Ravel and Debussy, were very ahead of their time and composed pieces that use this pedal.

The sustain or damper pedal is used far more often than the other two pedals and creates a sustained sound, which means that even after your finger leaves the key, the sound is still there for a bit. It adds a legato effect to the music as well as a nice blurriness. But this blurriness can also be overdone, which means that it’s important to practice this pedal and learn how to use it properly.
The sustain pedal will connect your chords and notes and make transitions a lot smoother. If used improperly, it can make sounds that are indistinguishable, which is why practice for this pedal is so important.
Practicing all three pedals is important because you have to depress them properly so they aren’t too noisy, especially when you press them all the way down to the floor. You’ll be using your right foot for the sustain pedal and your left foot for both the soft and sostenuto pedals. The more you practice with the pedals, the easier it will become to sound good as you play.

Do You Need Three Pedals for Piano?

Technically, you don’t really need foot pedals on a piano, but their use is written into sheet music for a reason. The reason why there are three pedals is that nowadays, this is standard and therefore all new pianos have three foot pedals on them. If you do come across an older piano, it may very well have only two pedals. Each pedal has a different purpose, but the right (sustain) pedal is used more often than the other two.
Pianos with only two pedals have a left and right pedal but no pedal in the middle. In both two- and three-pedal pianos, the left pedal is the una corda (soft) pedal and the right one is the sustain pedal.

What’s the Difference Between Two and Three Pedals on a Piano?

Newer or modern pianos always have three pedals, and they are described above. Three-pedal pianos have a una corda (soft) pedal on the left, a sostenuto pedal in the middle, and a sustain pedal on the right.
More often than not, if you’re playing the piano you’ll be using three pedals. Older pianos often have only two pedals, and this includes the una corda (soft) pedal on the left and the sustain pedal on the right. When you’re playing a piano with three pedals, the middle pedal is sometimes different.
In other words, some piano companies replace the sostenuto or middle pedal with a bass sustain pedal, which sustains only the lower “bass” notes. Others replace it with a practice or “celeste” pedal that will soften the notes even more quietly than the left (soft) pedal does. These are often made with a locking mechanism that allows you to practice without interrupting the people around you with unnecessary noise.

Do You Need Pedals for Playing Digital Piano?

For playing any type of modern sheet music, you’ll need at least the sustain pedal on the right to make the songs sound as they should. Many digital pianos have all three pedals, but if the one you’re looking at doesn’t have all three, make sure that it at least has the sustain pedal.
In fact, the sustain pedal is used so much more often than the other two pedals that your music will sound completely different if you don’t have any pedals at all. This is why it is so important to have a minimum of the pedal on the right whenever you’re taking lessons.

The answer to this question depends on how long you intend to play the piano. Many digital pianos do not come with pedals but have slots to insert them if you want to add them later. The thing is that you likely won’t need pedals when you’re first learning the piano because beginners aren’t taught this skill in the very beginning. Eventually, however, you will need at least the sustain pedal because this is the one that is used most often.
Of course, unless you intend to stop your lessons after barely getting started, it’s best to go ahead and buy foot pedals because it’s guaranteed that you will eventually need them in the future.