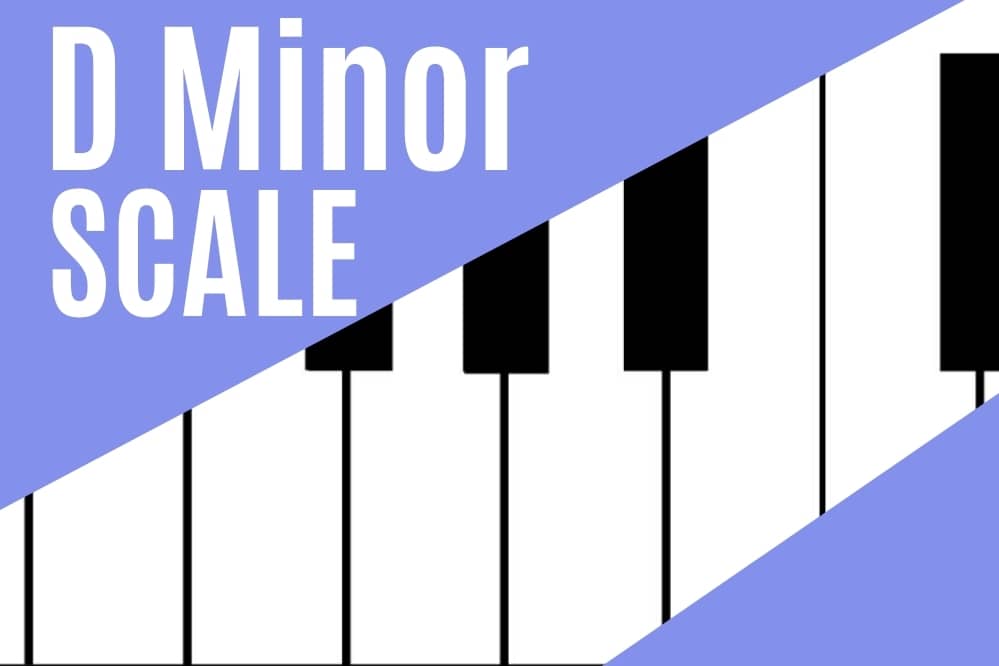 In this article we will learn about D minor scale.

The D Natural minor scale is by far the most common D minor scale that you will use, especially if you are working on playing classical pieces done by previous composers. This scale will have the pitches of D, E, F, G, A, B♭, and C with the key signature being one flat. The note intervals for the D natural minor scale, which will often be referred to as just the D minor scale, are as follows:

The relative major key that goes along with the natural D minor scale is going to be F major of the natural variant as well. The notes for F major are actually quite similar to that of D minor with those notes starting at F and then going to G, A, B♭, C, D, and E.

The formula for actually playing this scale, which can also be referred to as a pure minor scale, will be “W-H-W-W-H-W-W” with each “W” denoting a whole step in notes and each “H” denoting a half step for notes. This means that, starting with D, you would take one whole step to E but then you would take a half step from E to F. This will ensure that you can play the scale easily from memory.

Last, but most certainly not least, you will want to know the chords of this scale. There are going to be seven chords in total and they are as follows:

With that, you now know how to play the natural D minor scale. With this knowledge, you will also be able to quickly pick up on the differences between the melodic and harmonic variants of this skill, meaning that you will soon be able to play all of the D minor scales and you can begin practicing your very own songs once you have the chords well understood.

The D harmonic minor scale is, for the most part, much the same as the pure scale for D minor. The only difference in this scale is that you will need to raise the seventh note, or the note before last, of the natural D minor scale by half a step as you are going either up or down the scale. With the D natural minor scale as a base, this means that the C note will be affected, going from a C to a C#.

The formula for the scale changes to reflect this as well, becoming “W-H-W-W-H-W½-H” with “W½” denoting that instead of moving one whole step up, you will need to move one whole step and one half step up to reach C#.

Aside from this change and the subsequent finger placement, moving the fingers that would normally be on the C note to be on the C# key, the scale is entirely the same. This small change can make quite a difference in some songs and it may be required for you to learn as you are working with the D minor scales.

On a similar note, the melodic variant of the D minor scale is also quite easy to learn, especially after you have mastered the harmonic variant. Rather than just raising the seventh note of the scale by a half step, you will also have to raise the sixth note by a half step as well. This means that that the B♭ becomes a B, and the C becomes a C# for an ascending scale. Do keep in mind that for a descending scale, the notes will remain the same as they would for the natural D minor scale.

Just as the formula for the D harmonic minor scale changed, the formula for the melodic scale will also change to “W-H-W-W-W-W-H” and the descending scale formula will simply be the natural scale’s formula turned backwards. Additionally, you can expect that the placement of your fingers will subsequently change as well to reflect the different keys that you will press to hit the right notes.