Are the Keyboard and Piano the Same? 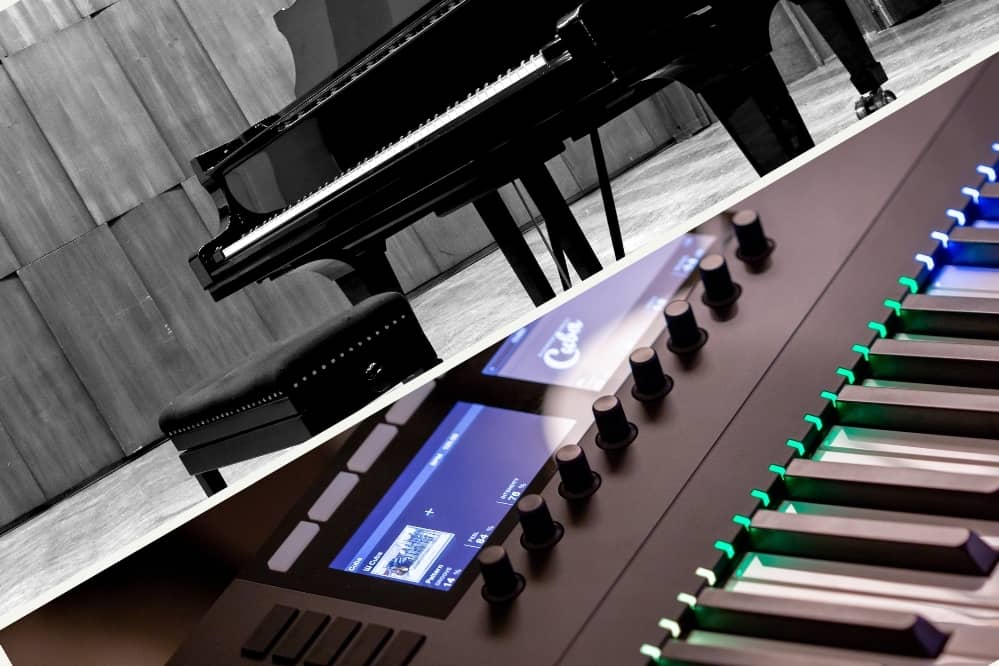 You’re looking to learn to play the piano, but you might be considering getting a much cheaper electric keyboard. Yes, this is definitely an option, but what are the differences? Are the keyboard and the piano the same thing?

Both are designed to make the same kind of sound, but there are in fact some key differences which you should be aware of. While they both look similar, there are some fundamental differences in terms of how they function and perform.

One of the most fundamental differences between pianos and keyboards has to do with the way they produce sounds. Technically speaking, a piano is a stringed instrument played through percussion. When you hit a key, a hammer hits a specific string, which makes a sound. It’s purely an acoustic instrument.

On the other hand, with a keyboard or electric keyboard, when you hit a key, there is no hammer or string; it’s all electronic in function. There are specific sounds which are programmed into each key. Electric keyboards require electricity and use synthesizers to make sounds, rather than pianos which are acoustic, physical, and non-electronic.

Another main difference between the piano and the keyboard has to do with the weight and feel of the keys. Piano keys are weighted and quite heavy, as you have to hit them hard enough to move the hammer. The pressure which is required to apply to the keys makes sound feel much more organic, and this allows for much more precise control.

On the other hand, because keyboards have no strings and hammers, the keys are much lighter and do not require nearly as much pressure to activate. This can be good for beginners as well as for children who do not have much hand strength. That said, due to the electronic nature of keyboards, their dynamic range is not as good as with a piano.

Related to these previous points is volume control. With a piano, volume is all about how hard you hit those keys. The harder the keys are pressed, the harder the hammer hits the string, and the louder the sound is. However, this is not possible with a keyboard, as there are no strings and hammers.

Another big difference between pianos and keyboards has to do with size and weight. A big upright piano is going to come in at 400 or 500 pounds at the very least and can weigh well upwards of 1,000 pounds. Pianos are by nature also very large and take up a lot of space.

On the other hand, a simple keyboard can easily weigh as little as 10 or 20 pounds, and barely take up any space. Therefore, if you only have a little bit of space to spare, a keyboard is a much more space-friendly option.

Also, for a keyboard, you can carry it around yourself, whereas with a piano, you’ll need to hire movers or get a few friends to help you move it. In this way, a keyboard is more convenient.

Another major difference between pianos and keyboards is of course the technology. Pianos can be tuned, and you can hit the keys harder or softer, but the general sound is still the same: It sounds like a piano.

In this way, keyboards are far more advanced, as they come with many technological features which allow you to alter the sound. Even the most basic of keyboards usually come with modifiers to alter tone and pitch, and most allow you to choose from various instrument sounds.

An electric keyboard can also sound like a guitar, a trumpet, or other instruments. If you are looking to have some fun and to create some really original music, a keyboard is what you want.

The other factor you will need to consider here is cost. Pianos are inherently expensive, and even the most basic models will cost several thousand dollars. Even the most expensive keyboards usually won’t be as costly as the least expensive pianos. You can find a decent keyboard for well under $1,000.

Both these instruments have a similar look, and in theory both are designed to produce the same sounds. However, if you are going for that classic piano sound with great dynamic range and awesome sound quality, it’s a piano you want. On the other hand, if you want something simple, ideal for beginners, fairly inexpensive, and very versatile, a keyboard is probably the better option.